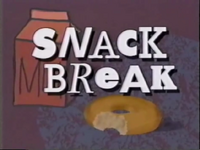 Snack Break is a segment that is shown at the end of the first round, the contestants were treated to a snack; however, as they were guests of an unconventional host, the snacks were delivered in unusual ways. In the vast majority of shows, the contestants were provided with bowls which they held over their heads to catch the snack, which was dumped onto them from above. When the nature of the snack made this method impractical, it would be lowered from above on trays or delivered by the hostess.

During the first season, the Snack Break occurred in the middle of the round, and the contestant in the lead at that point had the chance to win a small prize by correctly guessing which of three numbered refrigerators it was located in (similar to Let's Make a Deal). The other two each held a revolting food item.

Weenie Whistle logo
Add a photo to this gallery

Another Snack Break from season 2

A contestant grabbing the snacks from the fridge

The contestants having a food fight

Behind the scenes footage of a snack break.
Add a photo to this gallery

Contestants getting pied in the face in season 1

Contestants getting pied in the face in season 2
Add a photo to this gallery
Retrieved from "https://remotecontrol.fandom.com/wiki/Snack_Break?oldid=2155"
Community content is available under CC-BY-SA unless otherwise noted.